24 Hours in the Old Pueblo Dedicated to Rebecca Rusch 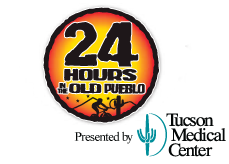 In addition to her seven World Championship titles (in multiple sports) and a multi world record adventure racer, Rusch is also the author of “Rusch to Glory”, the main character in the Emmy Award-winning documentary “Blood Road”, a public speaker, outspoken public lands advocate and entrepreneur. Rusch is the founder of the world-renowned gravel cycling festival Rebecca's Private Idaho, Rusch Academy cycling retreats, and the Be Good ™  Foundation.

Recently returning from her fourth annual MTBLAO mountain bike adventure to Laos riding the Ho Chi Minh Trail, Rusch and her Be Good Foundation started the trip to raise awareness and funds for clearing unexploded bombs still left from the Vietnam war. The film “Blood Road” documents Rusch's original trip to Laos in 2015, and her 1,200-mile mountain bike journey on the Ho Chi Minh Trail to find the crash site of her late father's fighter jet that was shot down during the Vietnam war.

“I go there as my annual pilgrimage to connect with my Dad and reinforce my purpose to Be Good and follow his instructions,” said Rusch. “The bike has become a catalyst for me for healing, evolution and change in myself and now for others.”

Part of Rusch's evolution was found in 24 hour mountain bike events, starting with the 24 Hours of Moab in the early 2000s. This form of endurance mountain biking launched Rusch's professional mountain biking career, and in 2014 as a Red Bull-sponsored athlete, Rusch fielded a team at the 24 Hours in the Old Pueblo; all her teammates were teenage girls from around the country who rode for the National Interscholastic Cycling Association (NICA).

Rusch will return to 24 Hour Town in the beautiful Sonoran Desert for the first time since 2014.

“Considering all that's happened in Rebecca's life since her last visit – a book, an award-winning film and public appearances around the world – Epic Rides is honored to have the Queen of Pain return to the 24 Hours in the Old Pueblo,” said Todd Sadow, Epic Rides President and Co-Founder. “She's become an inspiration to millions both on and off the bike, and I know everyone in 24 Hour Town is excited to play bikes with her for a weekend.”

The 24 Hours in the Old Pueblo is the longest-running 24-hour mountain bike event in America, filling to capacity within minutes of registration opening and attracting more than 3,500 attendees annually to the beautiful Sonoran Desert northwest of Tucson, Arizona. Considered the “Burning Man of Bike Races”, the 24 Hours has become as much a colorful celebration of community as it is an endurance mountain bike event.

Founded in 1999, Epic Rides has become world-famous for producing events that celebrate the many positive aspects of mountain biking. Events such as the 24 Hours in the Old Pueblo presented by Tucson Medical Center, Tour of the White Mountains, Grand Junction Off-Road, Whiskey Off-Road, Carson City Off-Road and the Oz Trails Off-Road are popular with participants because they offer challenging, fun riding and emphasize the joy and camaraderie inherent in the sport.

Rebecca Rusch holds seven world titles and is an acknowledged authority in adventure and ultra-endurance sports, deriving notoriety from her legendary feats in endurance cycling. As CEO of Rusch Ventures, she spreads her passion for adventure through a multi-faceted adventure lifestyle network comprised of media content, experiential enterprises, curated consumer products, and public speaking engagements. Under the banner of her nonprofit Be GoodTMFoundation, named for the signature from her father’s letters home during the Vietnam War, she has raised over $500,000 for bike-related charities across the world. She is the best-selling author of Rusch to Glory: Adventure, Risk and Triumph on the Path Less Traveled; star of the Emmy-winning film Blood Road; and a volunteer firefighter in her hometown of Ketchum, Idaho. For more information and to #JoinTheRusch, visit RebeccaRusch.com.

Podcast: Echoes of the Vietnam War

Finding Mastery Podcast: The Explorer's Guide to Self Discovery